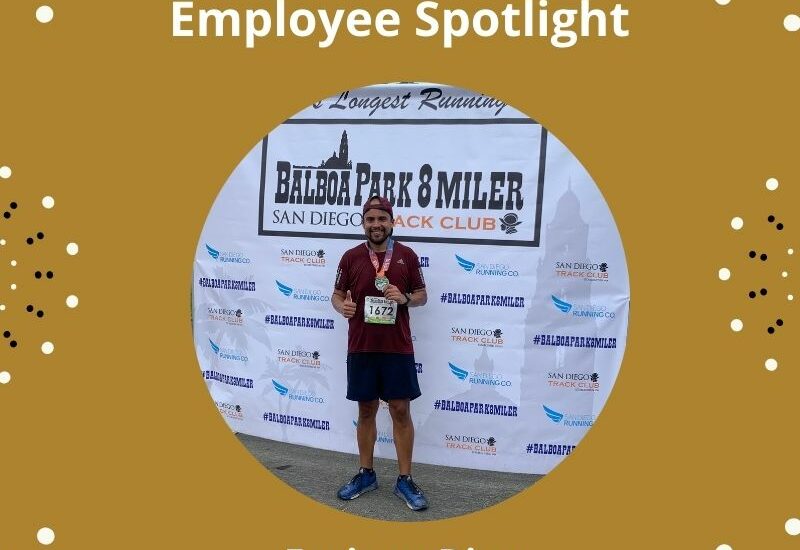 Enrique was born in Mexico and attended school there through the 9th grade. Growing up in Mexico his family moved constantly, but most of the years he lived there, he lived in Guadalajara. Enrique moved to the US in September 2001 at the age of 14 and started 10th grade at Hoover High School. When he came to the US, he did not know any English and by his senior year, he was placed in AP English which was a bit scary at first.

During his junior and senior years of high school, he was in the cross country, soccer, and on the track team. After he graduated, Enrique’s plan was to become a PE Teacher. He first went to community college and then transferred to SDSU and chose Kinesiology as his major. However, when he was in college, he had the opportunity to work as an Assistant Coach for his old High School’s cross country team for one season, and that was when he realized that being a PE teacher wasn’t for him. Not knowing what he wanted to do next, Enrique decided to take an accounting class and completely loved it. It was then when he knew for sure what he wanted to do for a living and changed his major to Accounting.

Enrique’s very first job was in a catering company. He worked as a caterer for about 7 years. When he was in college and changed my major to Accounting,ge decided to work as a Tax Preparer for three seasons after having to take a tax class. After that, Enrique wanted to stop working in catering and focus on finding a job in the accounting field. He decided to quit his catering job without knowing whether or not he would be able to find the job he wanted. He decided to take the risk of quitting without having a job lined up because he knew that would encourage him to really focus on finding a new job.  A friend who was working at FLORES told me that the company had some temporary part-time positions for their night shift. It was only supposed to be for a few weeks and only part-time. But grew into full-time where he was offered a permanent position.  Now it has been close to 9 years that Enrique has been a part of the FLORES team and loving it.

At FLORES, Enrique’s title is Senior Reconciliation Specialist. He likes working for the recon department because it feels like you’re solving puzzles when you’re doing a recon. He likes working at FLORES because you always feel appreciated, and you know that if you ever have questions, there will always be someone to help you. “I also love the flexibility that working from home gives me. My wife works too, so being able to work from home gives me the chance to be able to take my son to school and pick him up. At FLORES, being able to help a coworker figure out something they’re stuck on helps me feel accomplished. At executing tasks, I like to be thorough with everything I do. There isn’t an issue, a variance, or anything that is too small,” says Enrique.

Enrique’s hobby is long-distance running – usually running at Mission Bay and Coronado. He has two children (4 and 6) and has been with his wife for 17 years. His boys love going to the Zoo, the Safari Park and Seaworld. Family is everything to Enrique, and he likse to spend as much time as possible with his wife and kids. In his personal life, seeing his kids and wife happy makes him feel accomplished. Enrique strives to be a good father and a good husband.

Favorite quote: No pain, no gain. It was a quote that we would use a lot when I was in sports in high school, and it really has helped me through life. Any time I have gone through hard times, I tell myself that anything worth achieving will always be hard. If it was easy, then it would not really be an achievement.