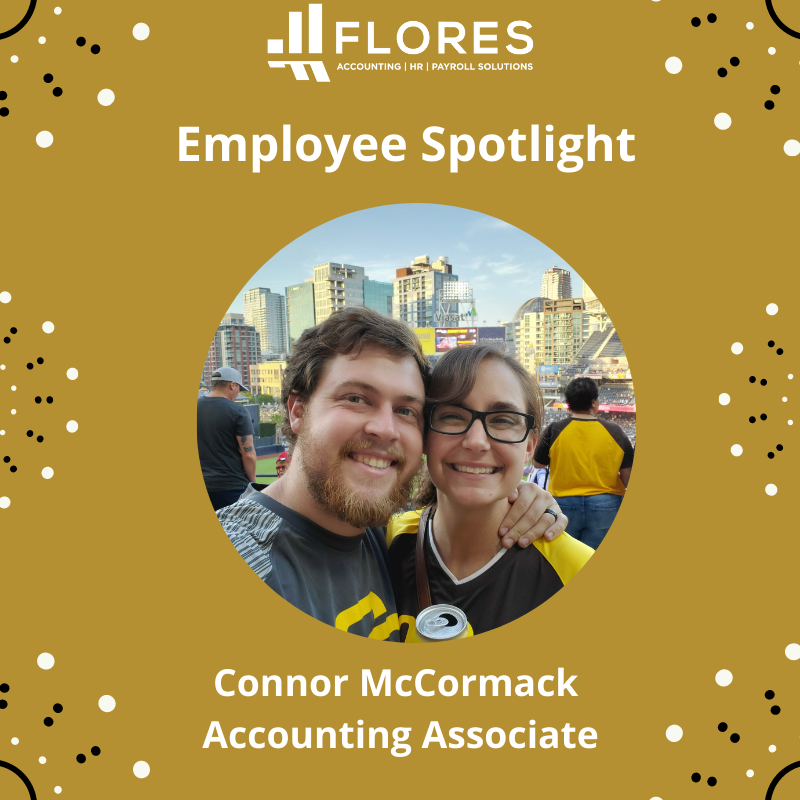 Connor grew up in Scripps Ranch, moved to Santee when he was around 13 years old. Graduated from West Hills HS in 2014, attended Grossmont College and received his associates in business in 2019.

Connor comes from a family of soccer players. His dad was born and raised in Scotland and it was his lifestyle growing up, so he transferred his love for the game into Connor and his 2 brothers. Connor plays 3 times a week at the peak, mostly as a goalie. When not at work or playing soccer he enjoys going home and watching Netflix. Connor is also very passionate about food and cooking, and has aspirations to open his own restaurant someday if he can find in the cards to do so (anything is possible!)…

Before working at FLORES, Connor worked at Vons which during the last year of his tenure he started to learn bookkeeping in correlation with what he was learning from college at the time. When a former FLORES employee he attended high school with posted about a FLORES job fair (great resource!). He took the chance and attended the job fair hoping to find something that felt more like a career rather than a job. Connor’s current title is AAI. Favorite aspects about the company is the ability for anybody to advance, as well as the opportunity for those new to bookkeeping to learn on the job. His favorite part of the culture is the willingness of everyone to help and the desire that exudes from management to help mold those around them into the best versions of themselves, which is a philosophy he’s always held dearly.

FAMILY! Important people in Connor’s life are his wife and family. His wife, Karissa and Connor have been together since their sophomore year of high school and are hitting their decade mark in January 2022! They just purchased their first home in September this year (YAY!). Carissa and Connor have inspired so much growth in each other over the last 10 years, and look forward to continuing growing for the rest of their days. Connor’s family has always been supportive and loving, and he says “I couldn’t have asked for a better group of people to be there for the good and the bad of everything life has to thrown”.

Lastly, Connor feels accomplished when he breaks through barriers he considers too difficult to try, no matter the task. Things as small as successfully making a new recipe which he previously was too intimidated to try, all the way up to buying their first house, which is something he didn’t think he’d be able to ever do 2 years ago. Connor hopes to continue to grow as a person, and continue to break through blockades he had previously set as impossible.

“– My dad. I’m sure that phrase has predated my father’s father, but I grew up hearing it from him very often growing up and it’s the quote I put into practice the most during day to day life” Says Connor.